A cesspit is a sealed tank for the reception and temporary storage of sewage. Because it is sealed, the tank must be emptied frequently. A cesspit and cesspool is the same thing.

Planning and development regulations for the protection of the watershed prevent home-owners who live close to rivers and environmentally sensitive areas from installing a septic system, requiring a holding tank instead. Or for some commecial premesis, such as campsites, a cesspit is required due to the potential of toxic waste.

A cesspool was at one time a dry well lined with loose-fitting brick or stone, used for the disposal of sewage. Liquids leaked out through the soil as conditions allowed, while solids decayed and collected as composted matter in the base of the cesspool. As the solids accumulated, eventually the particulate solids blocked the escape of liquids, causing the cesspool to drain more slowly or to overflow..

Cesspit and Cesspools emptied in Somerset and Devon

Potential Problems
The waste cesspool is vulnerable to overloading or flooding by heavy rains or snow melt because it is not enclosed and sealed like conventional septic tank systems. It is also vulnerable to the entry of tree roots which can eventually cause the system to fail.

Many homes do not have enough land for the installation of a cesspit. A cesspool for a 4 bedroom house must be a minimum of over 42,000 litres capacity, which results in a tank that is over 11 metres long and 2 metres wide. All of this tank must be a minimum of 7 metres from a building and 2 metres from a boundary and many modern homes do not have a large enough garden to fit one in.

A Cesspool can smell quite badly as is has to be vented to allow excess sewage gases to exit the tank.

They should have an alarm fitted in order that you are aware when the tank needs emptying. This should be your ONLY method of checking.

On NO account should you lift the lid to check the level in the cesspit as the toxic gases can overcome you very quickly!

The cesspit can overflow or may leak, particularly if it is an old brick or block construction. Previous owners may have knocked a hole in the tank ( more common than is realised! ) or piped the liquid into a ditch (very common)in an attempt to reduce the emptying interval. Overflowing or leaking cesspits are an offence under the 1936 Public Health Act. Also, if it pollutes a water course, the Environment Agency can take legal action under the Water Resources Act 1991. This can lead up to a fine of £20,000 and 3 months imprisonment. If you are considering buying a house that has a cesspit, always have a survey carried out to make sure that the tank is watertight. If it is, and there is no other means of sewage disposal, think very carefully about the enormous running costs and wether you can afford them.

If the cesspit leaks, a wastewater engineer should be called out to remove the waste and clear up the sewage. The cause of the leak should be found and remedied, although, if it is a fibreglass cesspit, this may be impossible.

Older brick versions will have been installed many years ago and great care should be taken to avoid walking or driving over the top of them. They cover a very large area under the ground, up to 20 square metres, and this makes them very weak as they deteriorate. It is not unknown for the top to collapse, in fact, several people have been killed as a result of this since the year 2000.

ALWAYS have the cesspit checked by a wastewater engineer prior to purchasing any property which has sealed tank drainage.

We are experts at cesspool and cesspit emptying in Somerset and Devon.
Call us today for a no obligation quote on 01823 284 790 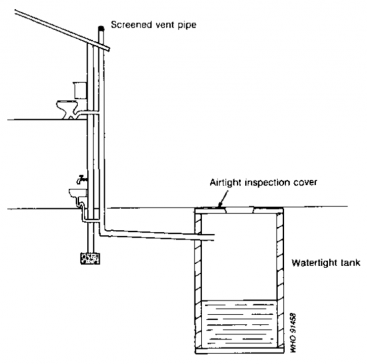